Since mid-September,  ERGO has been taking part in the final field tests of the projects included under the European Commission’s (H2020) Strategic Research Cluster (SRC) programme. These tests are due to run until December 15 and will validate the framework of the projects in scenarios representative of space robotics.

In October, ERGO ran its orbital scenario field tests on GMV’s platform-art©. The tests involved the repair of an artificial satellite in orbit (the target), using a service spacecraft (chaser) that approached the satellite to repair it by means of a robotic arm. The satellite to be repaired was made up by a set of cubs (Active Payload Modules, or APMs) that could be replaced in orbit. The tests showed the ERGO system to be capable of drawing up a plan with the sequence of operations to be carried out with the cubes until achieving the desired configuration. Crucially, it was also proven that, should any fault occur during the operation, the system is capable of drawing up a new plan to lessen the fault’s effects, achieving, where possible, repair of the satellite in orbit without the need for any operator intervention.

Finally, from mid-November to mid-December the northern tip of the Sahara desert in Morocco staged the final tests of ERGO and INFUSE (the latter led by the Belgian firm Space Application Services).

SherpaTT will be using a pioneer robotics technology developed to conduct an autonomous long-distance mission. With the goal of taking a soil sample at a remote destination, the rover will travel a kilometer-long route in the Moroccan desert landscape of wide plains, but also steep slopes and gorges. In doing so, it has to plan its own route and react to unforeseen situations, e.g. adapt to changing ground conditions and overcome obstacles. Along this route SherpaTT will be carrying a camera and image recognition system capable of ascertaining if the surrounding rock or soil has interesting features not previously catalogued, for subsequent characterization and analysis. On this principle of opportunistic science SHERPA.TT will act autonomously, altering its initial plan defined by human operators to suit this new information input. This new plan will include taking images of the unknown features catalogued as of potential interest (rocks, terrain, etc…). This whole process will definitively prove the ERGO system’s autonomous decision-making capabilities.

Please visit DFKI twitter to be updated on the tests and also please see the press release with all details. 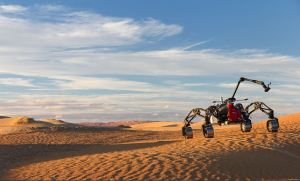