On 11th September 2018, the Test Readiness Review (TRR) of the ERGO project took place  at GMV’s premises in Tres Cantos (Madrid, Spain). The TRR marks the completion of the framework software development, unit testing, integration activities, as well as the preliminary field tests; and the start of the final Field Tests campaigns. In this new phase,   the ERGO autonomous framework will be validated in two of the major application scenarios (planetary exploration and orbital servicing). Both scenarios demand a high level of on-board autonomy. During the meeting a summary of the work done during this phase was presented to European Commission (EU-REA) and ESA reviewers (PSA).

The consortium members showed the achievements of each partner, the tests performed, and the current results with videos of simulated and real tests (as the preliminary tests conducted at DFKI’s Bremen facilities). In the meeting also took place a real demonstration of ERGO in the robotical laboratory using the UR-5 robotic manipulator. The TRR was declared successful allowing the ERGO consortium was authorised to start the Field Test campaigns and the last phases of the project, which will be validated in analogue-field scenarios: in the case of the orbital servicing at the Platform@art (at GMV’s facility) and in the case of the Planetary on an analogue field tests in Morocco. 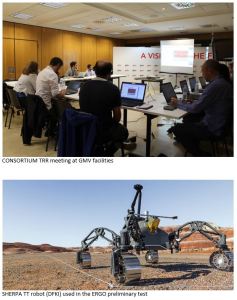