February 21, 22 and 23 saw three of the outstanding milestone moments of FACILITATORS, ERGO and ESROCOS, respectively, with the holding of the Critical Design Reviews (CDRs) to set out detailed designs and prototypes.

The goal for the ERGO CDR was to review the work performed during the last phase of the project, the final design document as well as the final definition of the test scenarios.

During the review each partner provided its own presentation: Airbus UK for the Guidance of the Rover, Scisys showed the approach for the implementation of a scientific agent, King’s College London & Basel University and GMVUK in charge of the planner, UGA for formal verification methods, and GMV presented the integration of all these tools into the use cases design. In addition, Ellidis showed their advances in TASTE interfaces

During the meeting, reviewers agreed on the completeness and the high degree of detail of the documents provided. There was a common consensus on the difficulties to be faced, but also of the clear advances with respect to the previous milestone (PDR)

These CDRs were attended by partners from the consortium of each project, plus the European Commission's technical officer and PSA representatives for assessment of the final result, a resounding success in all cases. The projects of the first SRC call thus cross their equator and embark on the final phase, which will see the start of implementation of all developed technology. 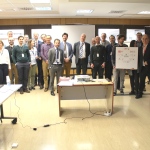 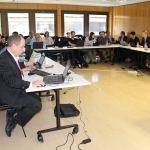 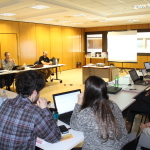