You are here: Home » Background » Objectives 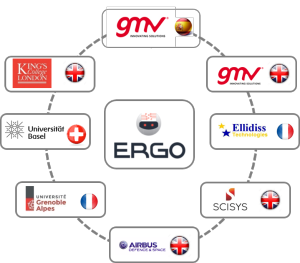 “The main challenge for OG2 is to realise a software framework for the development of highly autonomous space robotics missions. In these a robot system, given a high level goal, will (re)plan, schedule and oversee the execution of elementary actions to attain the goal, considering Time/ Space/Resources constraints”.

Following above statement, ERGO proposal is built around the following key aspects:

In line with the SRC goals, ERGO shall fulfil, as minimum, the following main objectives:

Obj 1. Goal-based commanding. ERGO shall be able to be commanded via high-level objectives that will be decomposed by the system into low-level commands managed by the RCOS output of PERASPERA OG1.

Obj 3. Dynamic re-planning: ERGO shall detect, as soon as possible, whether the revealed conditions do not allow the consecution of a given goal, discarding it and updating the plan accordingly.

Obj 4. Scheduling and overseeing capabilities. ERGO shall be able to schedule the low level commands and monitor the observations, handling reactive and deliberative capabilities in a harmonic fashion.

Obj 5. Adjustable/selectable level of autonomy (E1 to E4 see Section 3.2.3). Even if the major objective of ERGO is to allow goal oriented commanding and planning/scheduling, the system shall be designed to adapt the level of autonomy, from tele-operation to full autonomy, according to the mission requirements and or event occurrence. The applied level of autonomy will be selectable by ground operator, not by ERGO itself.

Obj 6. Flexibility with respect to application domains. As already addressed ERGO shall be suitable both for orbital and surface exploration.

In addition to the above objectives directly derived from the SRC requests, it is proposed for ERGO to tackle the following objective:

Obj 8. Suitable for flight. ERGO shall be designed and implemented using programming languages suitable for on-board flight software solution and future space robotics missions. The algorithms will be designed and selected taking into account flight software technical constraints (e.g. processor requirements, memory allocation, etc.) that would allow the system to be migrated/codeable/suitable for an operation flight SW.

The strong, and most likely unique, value of setting Obj. 8 can be summarized as follows:

It shall be stressed that the combination of Objectives 1 to 8 is such that ERGO will be into the position of being assumed as the European, and possible not limited to Europe, standard for Autonomous Goal Oriented Software Framework solution for robotic (orbital and surface) missions.